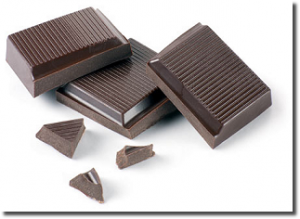 Consuming as little as a square of chocolate per day could help reduce the risk of hypertension and heart disease, according to a new study in the European Heart Journal.

Researchers analyzed data from over 19,000 middle-aged men and women in a study called the European Prospective Investigation into Cancer (EPIC).

The subjects were followed for an average of 8 years. Measurements- including blood pressure- were taken upon enrollment, and the participants were given dietary questionnaires.  They also completed questionnaires every two to three years reporting information about chronic disease and the incidence of both heart attack and stroke.

The data revealed some very good news for chocolate lovers.

Participants whose chocolate intake ranked among the highest 25 percent (an average of 7.5 grams per day of chocolate) had lower blood pressure and a significantly reduced risk of heart attack or stroke compared to subjects whose intake was lowest (average of 1.7 grams per day).

The difference in intake amounts to the equivalent of a single square of a 100 gram chocolate bar!

“Our hypothesis was that because chocolate appears to have a pronounced effect on blood pressure, therefore chocolate consumption would lower the risk of strokes and heart attacks, with a stronger effect being seen for stroke,” said lead researcher Dr. Brian Buijsse of the German Institute of Human Nutrition in Nuthetal. “People who ate the most amount of chocolate were at a 39% lower risk than those with the lowest chocolate intakes”

According to the researchers, if people in the group eating the least amount of chocolate increased their chocolate intake by six grams a day, 85 fewer heart attacks and strokes per 10,000 people could be expected to occur over a period of about ten years.  That may not sound like a lot- but if you’re one of the 85 people not having a heart attack or stroke, it’s pretty meaningful! And according to Buijsse, if the 39% reduction in risk were applied to the general population, the total number of avoidable heart attacks and strokes could be even higher.

“Flavanols appear to be the substances in cocoa that are responsible for improving the bioavailability of nitric oxide from the cells that line the inner wall of blood vessels – vascular endothelial cells,” explained Dr Buijsse. “Nitric oxide is a gas that, once released, causes the smooth muscle cells of the blood vessels to relax and widen; this may contribute to lower blood pressure. Nitric oxide also improves platelet function, making the blood less sticky, and makes the vascular endothelium less attractive for white blood cells to attach and stick around.”

“Basic science has demonstrated quite convincingly that dark chocolate particularly, with a cocoa content of at least 70%, reduces oxidative stress and improves vascular and platelet function,” commented Professor of Cardiology Frank Ruschitzka, who is the Director of Heart Failure/Transplantation at the University Hospital Zurich, Switzerland, and a Fellow of the European Society of Cardiology. “However, before you rush to add dark chocolate to your diet, be aware that 100g of dark chocolate contains roughly 500 calories. As such, you may want to subtract an equivalent amount of calories, by cutting back on other foods, to avoid weight gain.”

Remember- this good news only applies to dark chocolate with a high cocoa content. Milk chocolate and garden-variety candy bars aren’t included- the healthy flavanols you get in cocoa just aren’t there.

Of all the “healthy eating prescriptions” you hear about, eating one square of delicious, high-quality dark chocolate with a 70% cocoa content has to be one of the easiest to follow. How hard is that?