Having previously done a fairly detailed Primer on Dietary Fats, I wanted to do something similar on the topic of carbohydrates (in the future I’ll do one for protein as well).  In this article, I’m not going to look at many of the debates surrounding the issues of carbohydrate intake (in terms of body weight, body fat, or health), you can read Carbohydrate and Fat Conteroversies Part 1 and Carbohdyrate and Fat Controversies Part 2 for somewhat of an examination of that.  Rather, I just want to focus on some basic definitions and concepts since there tends to be a lot of general confusion over the topic of carbohydrates.

What is a Carbohydrate?

The term carbohydrate is sort of an overall classification referring to a number of different organic compounds, which I’m going to detail below.   You may often see the abbreviation CHO (for Carbon, Hydrogen and Oxygen) to refer to carbohydrate.  Although fiber is a carbohydrate, I’m not going to discuss fiber in detail in this article; rather I’d refer you to Fiber – It’s Natures Broom for a detailed look.

As I have discussed in many articles on the site, the primary role of carbohydrate in the body is energetic, that is it is broken down in cells to provide energy through a variety of pathways.   At the same time, strictly speaking, carbohydrate is not an essential dietary component; that is, you can survive without eating it any of it at all (an explanation of essential vs. inessential nutrients can be found in A Primer on Nutrition Part 1).  How many carbohydrates should be consumed in the human diet is a topic of endless debate controversy, I’d refer readers to How Many Carbohydrates Do You Need? for a detailed look at the topic.

Now, another term that is sometimes used to describe carbohydrates is saccharides and, with that trivial note made, there are three primary classes of carbohydrates which I’m going to first list and then describe in more detail below in terms of what they are, what they do in the body and where they are found in the food supply.

To keep the article length under control, I’m only going ot discuss the monosaccharides today.  I’ll discuss oligosaccharides and polysaccharides (along with an article summary on Tuesday of next week).

The term monosaccharide refers to a single ’sugar’ molecule (’mono’ = single; saccharide = ’sugar’) and are often referred to as simple sugars.  The monosaccharides are glucose (blood sugar), fructose (fruit sugar) and galactose (milk sugar).  I should mention that there are other monosaccharides but the above three are the ones primarily found in the diet.

One that does come up on fitness forums (due to it’s use in many sports products) is dextrose which is simply d-glucose.  The ‘d’ refers to the chemical structure (normal glucose would be more accurately described l-glucose and you can technically have both d- and l-fructose) and I’ll leave it to the organic chemistry nerds to worry about it beyond that. Simply recognize that both dextrose and glucose are are form of glucose (effectively they are molecular mirror images).

Now, free glucose is found in some foods (fruit has some and many types of candy will contain glucose) although it’s primarily associated with blood sugar (when diabetics are measuring their ‘blood sugar levels’ they are measuring blood glucose levels specifically). This is because glucose is the type of sugar found almost exclusively in the bloodstream of humans.  Quite in fact, almost all other dietary carbohydrates will either be converted to or simply appear in the bloodstream as free glucose.

I should probably mention that fructose got a lot of press one point as either a superior sweetener or a sugar that was ideal for diabetics.  In terms of the latter, due to it’s slow digestion and general lack of effect on blood sugar or insulin response, dietary fructose was thought to be superior to sucrose.  However, it’s turning out to be much more complicated than that.  Excess dietary fructose (and please note my use of the word ‘excess’) can cause problems in terms of raising blood triglycerides and having other negative effects.

So, while the fear and scare-mongering of the anti-fructose brigade (who are often looking at insanely non-physiological amounts of fructose; amounts that simply aren’t achievable in a normal human diet) tends to be a lot of nonsense, there’s little doubt that too much fructose can be a bad thing.  I’d note, and this is discussed in some detail in the article (and especially comments section) of Straight Talk about High-Fructose Corn-Syrup: What it is and What it Aint that the fructose mainly becomes and issue when it’s being mainlined as part of sugary sodas.

It would take an absurd amount of say, fruit, to provide enough fructose to the diet to cause problems.  The liver can generally handle approximately 50 grams of fructose or so before you start to see conversion to triglycerides or other negatives (when you divide the studies up into those that find problems versus those that don’t, 50 g/day is about where the cutoff occurs).  While that intake level might be easily achievable by someone consuming a lot of sugary soda, given taht an average piece of fruit is roughly 7% fructose (e.g. 7 grams fructose per 100 grams of fruit), well..that’s a lot of fruit (~7 average pieces per day).  But, in my opinion, anyone consuming gallons of sugary soda per day has bigger issues in their diet than the HFCS/fructose intake.  But I digress.

Finally is galactose, or milk sugar, found, as you might imagine in milk and dairy products.  I don’t have much to say about this one here but will come back to it below.  I’d only note that galactose tends to be metabolized similarly to fructose in the body; that is it’s dealt with in the liver. Since galactose tends to make up a fairly small amount of the overall diet (unless massive amounts of dairy are being consumed), I don’t usually consider this worth worrying about.

As a final note, there are a host of other types of monosaccharides that can either occur in small amounts in the diet or be made.  Ribose is one simple sugar, for example, that was one promoted to improve performance.  Some of the sugar alcohols (e.g. xylitol) also fall into the category of monosaccharide but since they are modified carbohydates (simple sugars with an alcohol molecule tacked on), I’m not going to discuss them here.

Simply while there are far more monosaccharides that can be found in the diet (or at least obtained), glucose and fructose are going to be the major players (and glucose more than fructose); galactose intake will depend entirely on dairy intake or the lack thereof.

And that’s where I’m going to wrap it up for today.  On Tuesday of next week, I’ll discuss oligo- and poly-saccharides and sum up the topic overall. 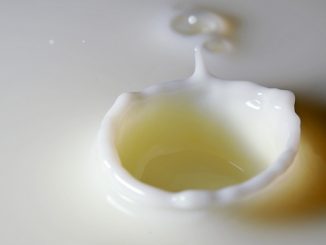 The Benefits of Fresh Real Milk