For starters, you can’t discuss the goblet squat without first acknowledging the man who popularized it, Dan John.

Secondly, I really dislike the Smith machine.  I was originally going to say hate, but hate is a strong word and should really be saved for stuff like leg curls and leg presses.  And Poodles.  But I digress.  Furthermore, I think any personal trainer who uses the Smith machine exclusively to teach someone how to squat, is doing a huge disservice to their client.  And, they’re lazy.  But that goes without saying.

In any case, the last time I checked, our bodies weren’t meant to move in a fixed plane of motion.   Moreover, it makes no sense- at least in my eyes- to play into someone’s dysfunction and have them use a piece of equipment that just feeds into it.

Instead, the goblet squat is my preferred exercise when introducing the squat to new clients.

Lets back track a bit, though.

For many, the lack of ability to squat to depth has often be recognized as a mobility issue.  We see this all the time when we screen athletes/clients who come into CP.  We’ll ask him/her to perform a simple bodyweight overhead squat, and more often than not, they’re lucky to get half way down before their knees start caving in, upper back rounds over, or heels come up off the ground, to name a few.

We can argue whether it’s due to poor ankle dorsiflexion, tight lats, tight hip flexors, or any combination of the three, but as Alwyn Cosgrove stated in this article, it could very well come down to a STABILITY issue.

As Cosgrove notes, the body is essentially shutting down, not because of tightness or restriction, but rather because it perceives a threat due to the lack of stability.

As such, this is where the goblet squat comes in.

By holding the dumbbell (or kettlebell) out in front of the body, the trainee is forced toengage their core, which in turn, will help stabilize the body.  In a matter of minutes, you can take someone with atrocious squat form, and have them squatting to depth in no time flat.

Which brings me to today’s exercise:

What Is It: Kettlebell Goblet Squat w/ Pulse

Who Did I Steal It From: Dan John, who else?

What Does It Do: Takes all the benefits of the traditional goblet squat- grooving proper squat technique, little to no spinal loading, improving hip mobility, amongst other things- and adds a little flare to it.  Namely, the pulse/press done in the bottom position, which really adds another dimension to the exercise, and hammers the anterior core.

– Chest “tall,” and shoulder blades should be together and pointing DOWN.

– Arching your lower back as hard you can, squat down, pushing your knees out to the left and right to help “open up” the hips.

– Once in the bottom position, I like to tell people to try to push their knees out with their elbows.

– From there, you’ll extend your arms, pressing the kettlebell until your elbows lock out.  Hold for a one count, and bring kettlebell back towards the body.

– Stand up, making sure to squeeze the glutes at the top, and repeat. 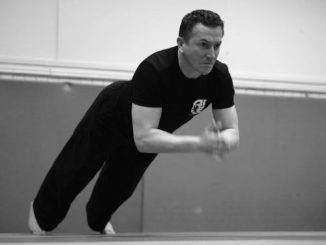 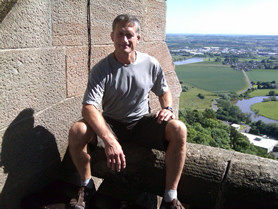 How To Fix Your Aches and Pains While Warming Up